As already mentioned in my recent posts about Landsat 8 the new data requires some changes in processing and I used this opportunity to overhaul my satellite image processing system.  The toolchain I use for preparing images for my 3d views in part dates back more than 8 years.  I now replaced some of the key components which were originally primarily designed to cope with the address space constraints of 32 bit systems and at the same time introduced a unified processing for Landsat 5, 7 and 8 data.

The region I used for testing the changes is the Sierra Nevada de Santa Marta.  To produce a cloud free image I combined about 30 Landsat scenes from more than 20 years.  In addition to the cloud masking these are compensated for atmosphere and shading.  The changes in processing significantly reduce the hand work required when combining images from different satellites, different times of the year and with different lighting. Below you can see the processed and combined image which forms the basis for producing the 3d views. Note there is no Landsat 8 data in this image yet since weather conditions in the region have not been favorable recently. The following 3d views have been generated using this image and can be found in the Imagico.de Services and Products catalog: 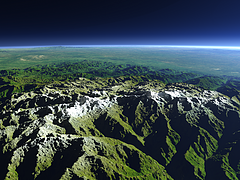 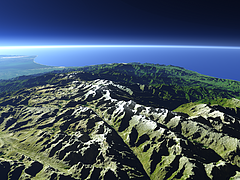 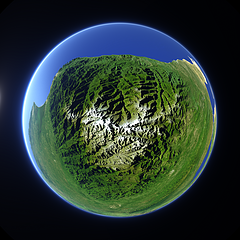 Here a crop from the first view of the Pico Cristóbal Colón: