I have made images of Mount Kilimanjaro before but the classical view of the mountain as it has been established by the writings of Hemingway and other colonial age authors as well as many movies set in the region features significantly more snow.  Since the mountain is located near the equator with relatively little temperature variation the extend of snow is primarily influenced by the seasonal variation of rain and snowfall.  The views below  show about the maximum extent of snow that tends to occur – down to less than 5000m.  This amount of snow has however become increasingly rare and the satellite image used here is from 1993. 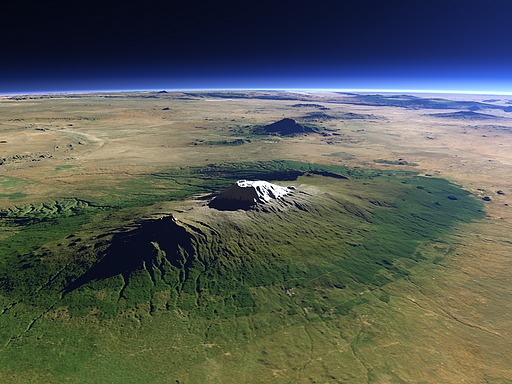 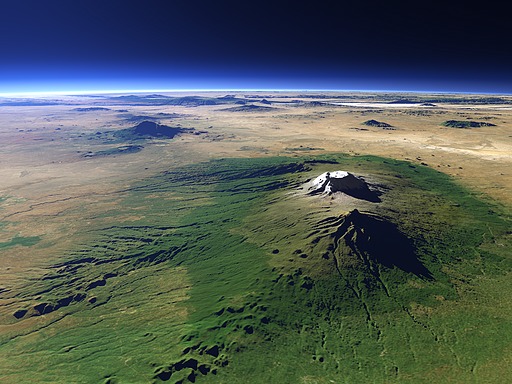 The strong decrease in permanent snow and ice happening on the mountain is therefore most likely not only a result of warmer but also of drier climate.  Since there is no clearly defined yearly minimum of snow cover like in higher latitude regions the change in glacier extend is not so well visible in satellite images.  The following views show low snow cover from both 1986 (first) and 2013 (second).  Only the data source of the immediate peak region was varied, the rest is the same in all views. The actual glacier extent today is quite a bit smaller as can be approximately seen in the following EO-1 image from 2012 (color version can be found on the NASA Earth Observatory): The first two views with extensive snow can be found on the Views of the Earth.  The 2013 image is available in the services.imagico.de catalog.